Note that this is not the same topic as discussed in Chip Rosenthal's "Reply-To" Munging Considerered Harmful" essay. That essay is about what the list should do, while this page talks about your choices as the user who is replying to the mail.

By default, Mailman will not send you a copy of a list email if it sees that your address is already listed in the To: or Cc: headers of the email. This can be changed by logging into the list web site and changing the duplicates setting.

Each of these people may have different preferences — it's hard to know what to do for the best, and whether to include them in Cc or not when you reply to their messages.

Obviously if they have told you their preference, then that's not so hard — just do as they ask. But most of the time you don't know; you have to guess. And when we're working on mail software, we have to set the default behaviour for a non-private reply. That's what prompted me to write this page.

You may not have spent too much time thinking about the different ways that people handle email; hopefully the above has given you some pointers.

Now it's time for you to make your own decision — if you don't know what the sender prefers, which one do you guess?

The corollary to the same question is: If you're working on a mail program, what should you make the default behaviour, if the user doesn't express a preference?

I've tried to stick to the facts so far and not offer my opinion. If you don't want to know what I think, you can look away now...

To me, the answer seems obvious when you look at the failure modes: Let's take a look at some of the details...

Note that even if people are sent multiple copies of a message via a substandard list manager which doesn't allow them to filter duplicates, often they won't see them anyway because many mail stores automatically eliminate messages with the same Message-Id header, since that's supposed to be unique. (This isn't a stunningly good idea, and Fred gets really unhappy if forced to use such a system, but it is distressingly common).

Pete was also unhappy that he couldn't use "Reply to List" on the message which he received directly, because it doesn't have the list headers. But we've just established that that's a benefit for everybody else since he shouldn't be doing that anyway!

However, it does also mean that for such messages you don't get to use the automated features like being able to unsubscribe using the details in the List-Unsubscribe: header, and other such things. Did you even know that was possible? When compared with the possibility of cutting people out of the discussion, I think we can agree that this is probably worth it. It's not as if it's hard to just click on a different thread in the list to get those headers. So you're actively participating in every thread in the list and it's hard to find a message with the list headers? Tell me... why did you want to unsubscribe, again? :)

Pete might not like being told that his filters are wrong. He might say that filtering on To: and Cc: headers like James does has false positives, and files messages into a list folder when they didn't really come via the list. Pete is theoretically correct to a certain degree, but filtering on the List-Id: header also has false positives in some circumstances. The best way to filter list traffic is actually on the Return-Path.

When this is pointed out, Pete will usually shrug his shoulders and say that those circumstances don't happen very often and using the List-Id: works well enough for him. That is probably the point at which we might suggest to him that, while James's method also has theoretical false positives, those are actually making it do the right thing for him most of the time — so Pete is probably better off using it.

I said "most of the time"... Pete might have a valid concern that if a message is sent to more than one mailing list that he's on, his filters might put it in the wrong place if he only filters on the contents of the To: and Cc: headers.

We should stop here and think for a second. What happens if we pander to Pete's demands that we all use "Reply to List"? That's right — we end up continuing the thread only on one of the mailing lists, fairly much randomly chosen from Pete's point of view, so he still gets the messages only in one of the folders! It's just that everyone else is inconvenienced, some in much greater ways, too!

But let's tell Pete how to fix it anyway. The best option, if you really want this setup for your email, is a combination of filters in two passes. First, do the "proper" filtering on the Return-Path of each list, so that any message which actually does arrive via a list is reliably filed into the appropriate folder for that list. And then, if you really don't want list conversations landing in your INBOX even after you've actively participated in them, your filters can also match on the To: and Cc: headers and filter matching mails into the appropriate list folders.

But maybe it's not worth bothering with that second pass. It's not like it's hard to move messages from your INBOX to a list folder if you want that to happen. And you might get used to the fact that when people are replying to your messages in a thread, you get to see their response and respond to it immediately rather than later on.

So there it is. Unless you know that the other people involved in the discussion are like Pete (and either can't or won't fix their own filters) — or that the list doesn't eliminate "duplicates" and they object to them — then you should always play it safe and use "Reply to All".

Deliberately replying only to one list and cutting others out of the discussion is considered to be extremely rude by some people. When they eventually find out.

So far, I've only spoken about the case where you know you want to reply in public. When we're thinking about what mail software should do, and what the default behaviour should be, we also have to consider the question of "public or private?". This one takes even less thought, and again the decision can be based entirely on the failure modes: So although people have occasionally asked for the default 'Reply' button and the associated 'Reply to Sender' menu option to actually reply to the list for list messages, that seems like a really bad idea — and most of the time they realise this when it's pointed out to them.

Any decent mail program will have separate options for a private reply, vs. a more public reply — and the private reply option should never trick you into replying back to the list.

For mailing list administrators, this is probably a reasonable time to refer back to the Reply-To-Harmful essay that I mentioned in the second paragraph. Setting a Reply-To: address to point back to the list is doing the wrong thing in both ways. It's hijacking my private "Reply" button and making it give a public reply, when I already had a button that I could use if I wanted to make a public reply. And it's even giving the wrong type of public reply — it's replying only to the list, instead of to all the correspondents.

Please, never set a mailing list to have a Reply-To: header point back to the list. That's like sending me a virus which infects my mail program and hacks it so that it replies in public when I specifically pressed the button which should give me a private reply. If I wanted to send a public reply, the button for that is right next to the one I pressed! If I'd wanted that, I would have pressed it. Thankfully, I now have this to save me: 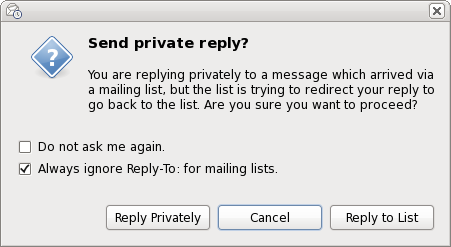 This is what we currently have in Evolution: a private Reply button, and a 'Group Reply' button which gives you a dropdown choice of Reply-to-All vs. Reply-to-List.

You don't have to use the drop-down menu, of course — if you just click 'Group Reply', it'll do the sane default which is Reply-to-All. You can go into the preferences and change the default to be Reply-to-List. Please don't, though.